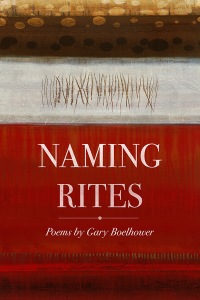 Gary Boelhower’s third collection of poems explores the ways we are named and branded with multiple identities, a clay vessel molded and imprinted from the inside and the outside by those who know us or think they do, by wounds, worries, stones, and nicknames, by place and absence, by teachers and traitors. Boelhower dares to name the body’s blows and pleasures and how they are celebrated in solitude and connection. His language soars with ecstasy and burrows into hidden places in the soul. His lyrics tell how the world’s pain lodges in the cells and how the fragrance of summer stars opens an aperture to healing. Boelhower is winner of the Foley Prize from America and the Midwest Book Award for his second collection Marrow, Muscle, Flight.

Naming Rites is such a generous collection it offers both blessings and confessions, dirt and bread, miracles and explosions, cruelty and mercy, great blue herons who resemble monks and blue jays clowning around, a lover’s tender touch and the horrors of the nightly news. In second grade, Gary Boelhower admits, he won ‘the glow-in-the-dark statue of Mary,’ and his religious drive, now mature, is still alive in these poems. They aim for (and often achieve) not just a personal record but transubstantiation, transforming experience into wisdom, fear into freedom, language into song. Naming Rites is the autobiography of a soul, reaching out beyond the boundaries of the self. Bart Sutter, author of Cow Calls in Dalarna and Chester Creek Ravine: Haiku

Gary Boelhower’s poems resist convention and confinement even as they speak deeply of and from history, family, and community. The persona names and narrates himself into being as he chronicles profound and tender encounters as well as ‘tectonic shifts and betrayals.’ Software engineers meditate, children go hungry, and faith is lost and reconfigured. ‘Let me not forget to be what I have spoken,’ Boelhower reminds himself and his readers. Naming Rites is an important and sustaining book for our times, with its ‘cadence that calls us into the streets with voices/of protest and hope.’ Julie Gard, author of Home Studies

Gary Boelhower’s poetry has been published in many anthologies and journals. His second collection of poems published in 2011, Marrow, Muscle, Flight won the Midwest Book Award. He was awarded the Foley Prize in poetry from America magazine in 2012 and a career development grant from the Arrowhead Regional Arts Council in 2010. His recent nonfiction books include Choose Wisely: Practical Insights from Spiritual Traditions, and Mountain 10: Climbing the Labyrinth Within,(co-authored with Joe Miguez and Tricia Pearce). His third collection of poems, Naming Rites, was published in April by Holy Cow! Press. Gary teaches courses in spirituality, ethics and leadership at The College of St. Scholastica where he is a professor in the Theology and Religious Studies Department.

2 thoughts on “In the Spotlight! Naming Rights, Poems by Gary Boelhower”

“one of the best books ever read”

In KU and more!

~
In addition to the tour companies listed above, I also try to keep an eye out for requests posted on the Facebook group, MM Authors and Bloggers Connection.
~
If you represent a tour company that includes promotions of LGBTQ+ books, or are an author of LGBTQ+ books, contact me if you’d like me to post an interview, guest post, or general promotion for you or your book(s).