Please join me in welcoming author Riley Parks to my blog. Riley’s here today answering questions about her writing process, and the development of her new book, Bleeding Like Me. 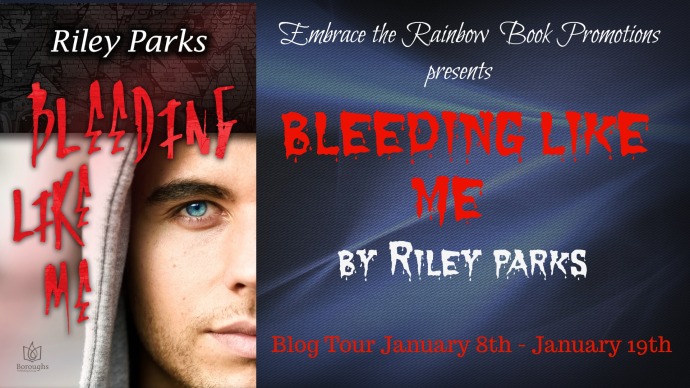 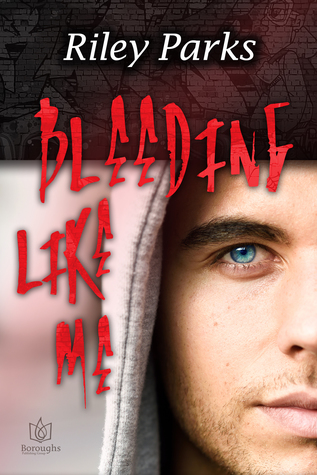 Being gay in their neighborhood is perilous. Being gay in a street gang is unheard of. Being gay and in love with a man in a rival gang is a death wish. Through drug addiction, brutality, and seemingly endless peril, they remain; finding stability within each other that shouldn’t exist in their volatile world.

He didn’t paint people; the curves of their bodies and angles of their faces never interested him as much as cityscapes. The circumstances of his life had compelled him to create new worlds that he could get lost in rather than reflect the features of the people he ran from. He constructed buildings from their foundations, making them taller and stronger than he was. He adorned the edifices with countless windows, always left open or cracked so hope could pour in and fears could seep out. Tree lined streets reminded him how to breathe, pumping oxygen through the atmosphere, off the canvas, and into his lungs.

He’d never been to Humboldt Park before, but he heard it had a pretty good scene. When he was unaffiliated, he could get away with going to the gay spots on the South Side, but now that he was with the KKz, he had to be more careful. He disembarked and walked the short distance to the big rock where guys supposedly met. Sitting down on a bench, he pulled out a cigarette he had bummed off Luis and watched as a couple of queens made a connection and disappeared into the wooded area a few feet behind the boulder. He let the filter rest between his lips as he leaned back to stare up at the moon. It was a waxing crescent that barely glowed against the black expanse of the sky, making the already poorly lit park even darker.

He peered down at a man who took a seat on the bench next to him. They sat quietly, Evan’s head still thrown back and the guy smoking his cigarette as if he hadn’t just propositioned him.

“Nice night,” Evan threw out as if he was telling the moon rather than the guy beside him.

“Are you looking to chitchat or are you trying to fuck?” When Evan finally dropped his head, he noticed that the guy was peering at him with raised eyebrows. They stared for a moment, and without a doubt, a spark arced between them.

“Depends what you’re into I guess,” Evan replied, noticing that the man had a perfectly plump pout. He wanted to see what those lips looked like wrapped around his cock. “I’m not going to bend over.”

“Wouldn’t want you to,” the guy replied with a sniff, blue eyes dropping to momentarily study the grass before returning to Evan’s.

“That right?” he questioned, moderately surprised. Mr. Ready To Hook Up seemed to be tough as fuck, with his sleeve tattoos and muscular biceps that were perfectly displayed in his gray sleeveless shirt. Evan knew it was a stereotype that men who exclusively took cock were soft, but in his experience, more often than not, they had been. He’d fucked a variety of guys, and there was always some negotiating between him and a dude who was versatile. This hot motherfucker was clearly a power bottom, a fact that had Evan’s cock standing up to take notice.

“Need me to spell it out for you, Daywalker?” he huffed, eyebrows raised in challenge.

Evan shook his head and self-consciously ran his fingers through his red hair. “So you want to go—” he began.

The guy interrupted by saying, “Show me what you got.”

Without wasting another second, Evan tossed his cigarette to the ground and unzipped the fly of his jeans, arching his back enough to shimmy them, along with his boxer briefs, down his thighs so his hard cock could spring out. Instinctively, he moved a hand down to the shaft and started to pump it.

Blue eyes observed every stroke as full lips smacked subconsciously. “Yeah, I want to fuck,” the guy stated, seemingly impressed by what Evan was working with. Wordlessly, the hot-as-shit motherfucker stood up and started walking, leaving Evan scrambling to get his pants up so he could follow.

Congratulations on your new release. Please tell us a little bit about it. What’s your favorite aspect or part of the story? Do you have a favorite character? Who/Why?

Thank you! Bleeding Like Me is a love story where all the purity and beauty of first love has been buried by the heavy life circumstances of the antiheroes. Evan and Jackson are two flawed men from the streets of Chicago, who, for disparate reasons, became affiliated with violent gangs. Being gay on the South Side is perilous. Being gay in a street gang is unheard of. Being gay and in love with a man in a rival gang is a death wish. Through drug addiction, brutality, and seemingly endless peril, they remain; finding stability within each other that shouldn’t exist in their volatile world.

My favorite aspect of the book is the journey Evan and Jackson embark on. I love how they grow to love each other. I couldn’t pick a favorite between them, because they’re both my babies. They would hate that I said that.

Are you a planner or a pantser? How much do you know about your story before you start writing? How often does your plan change? Why does this work best for you?

I’m a planner and a pantser. Before writing, I know the major plot points of the story and note them on an old school plot diagram (think literary hill style). I’ll map out those ‘big’ moments out and let the characters drive us there.

Do you schedule a certain amount of time for writing each day/week, or do you just work it in when you can? Would you like to change this, or does your current method work well for you?

I write whenever I get a free moment and I write quickly. It’s the only method that works for me. I keep my chapters short because I don’t like to stay in them for weeks. I find the longer I stay in a chapter, the more they’re bogged down. I want them to have movement, so I keep it moving.

What was the most difficult part of writing this book? Why?

The most difficult part was when it was over. I miss Jackson and Evan every day.

How do you develop a story idea? Do you always use the same method? Specifically, which do you develop first in your story building, the characters or the plot?

The characters come first. I make sure I really know them because they drive the plot. If I was stringent about the plot line before writing the characters, I may feel compelled to have them react in a certain way to meet my needs instead of their own. They’ll end up feeling disingenuous to the reader. The most important component of my novels is the characters. I want the reader to know them by the end of the story and understand why they made the decisions they made.

What are your favorite genres when it comes to your own pleasure reading? Do you prefer to read ebooks or print?

My favorite genre is M/M Romance. I prefer ebooks, though getting the print copies of Bleeding Like Me was a really special moment.

If you could tell your younger writing self anything, what would it be?

It’s not weird you’d rather write than go out and party. Eventually, you’ll do both.

What is the best money you ever spent as an author?

Ask me in a few months!

What do you find to be the most difficult thing about writing characters from the opposite sex?

I don’t think it’s difficult, but I’m cognizant of wanting their voices to sound a certain way, like them and not me.

What did you edit out of this book?

My original manuscript went heavier on the Black Lives Matter movement, a theme that is still touched upon, though not as extensively. It’s easy for me to get carried away when focusing on topics I’m passionate about, but I didn’t want to move from the plot as much as I did in my first draft.

How do you select the names of your characters?

I wanted Jackson to have a nickname Evan could call him to show familiarity and I always loved the name Jack. I wanted Evan’s name to feel a little softer because though he’s tough in the book he’s fragile to me.

What were your goals for this book? Did you achieve them?

My goal was to create two incredibly flawed characters who heal through each other. I wanted the reader to root for them even though they weren’t classically worthy of that affection. I think I achieved those goals.

What do you think about when you’re alone in your car?

I think about the book I’m writing, or books I will write. If I hear a love song I consider what it would mean to my characters, and if I hear a raunchy rap song I imagine them having sex.

I was the Editorials Editor of the school newspaper and a band badass. I say badass because I badly sucked ass at my instrument but stayed involved because that’s where my friends were.

What are the three best things about you?

I’m kind, funny and I try my best to be a good person.

What was your favorite toy growing up?

I’ll be an author cliché and say it was my notepad and colorful pens. It’s the truth. Ask my mom.

Who would play you in a movie about your life?

I’d rather write a movie about someone else’s life. 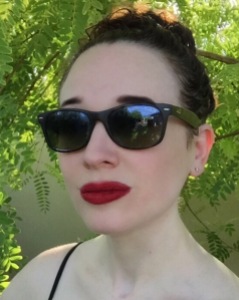 Riley has always loved to write, believing that life has the possibility to be its most beautiful when it’s portrayed on the pages of a book. Feeling the need to create and liberate in the midst of the political landscape, Riley writes novels that focus on LGBTQ protagonists, wanting to honor a community that deserves better representation depicting lives, loves and triumphs in all facets of fiction.

“Time travel at its best!”

"A wonderful and adorable read."