Boy Next Door by A.E. Wasp

It is a standalone book.

p style=”text-align: center;”>This is a story about losing the path and finding yourself.
It contains kissing, yelling, spanking, and carb-loaded family interventions. 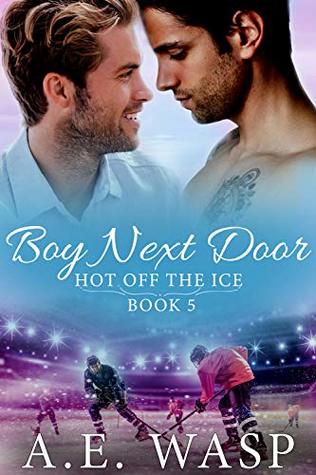 Hockey superstar Joey Luciano has always been good at being whatever people needed him to be. The fans want a good-looking fast-living party boy? Enter ‘the Looch,’ Joey’s carefully created public persona. But the cracks in his mask are starting to show, and he’s begun to lose touch with who he really is. It’s going to take someone who’s been there from the very beginning, to help him find his way home.

Coach Liam O’Reilly always had a very clear picture of what his life should look like. Falling in love with the infuriating, passionate, stubborn, and endlessly fascinating boy next door was not part of the plan. But when Liam’s carefully constructed life fell apart one Christmas Eve, Joey Luciano was there to pick up the pieces. Now Liam can’t stop wanting him.

The passion blazing between them on the ice and behind closed doors could leave both of them badly burned. But through the smoke, Liam can see glimpses of a future brighter than any he’d imagined, a future worth risking his career and reputation for, if only he is brave enough to reach for it.

But Joey’s got a secret he’s keeping from everyone. If it gets out, it could be the end of everything.

“Hey,” Joey said, looking up from his phone as Liam fell into the bathroom. “Took you long enough. I’ve been in this fucking bathroom for ten minutes. It’s not that nice. One of those for me?”

Those were the first words he’d spoken to Joey since Christmas Day. Jerk. Stupid gorgeous jerk.

”Okay, then.” Joey reached for one of the shot glasses and downed it, coughing a little from the tequila burn. He’d been expecting whiskey. “Tequila?” Bad things happened when they drank tequila.

Liam nodded and poured the other shot down his throat.

Who else but his big sister would do that? Of course, he’d known they were planning on trapping him in the bathroom. He’d also known Liam would do what they wanted, too. The O’Reilly-Luciano double-team had a ninety-five percent success rate.

He’d gone along with it because someplace, not even that deep inside, he desperately wanted to see Liam again. To see if Liam would still have the same effect on him as he had since puberty. Joey licked the last drop of alcohol off his lips, feeling a tingle of lust when Liam dropped his gaze to Joey’s mouth. Yeah. Still, the same effect. Stupid, good-looking smug bastard.

Liam set his glass on the counter with a thud, and then closed the distance between them, forcing Joey to look up to meet his eyes. Sometimes Joey really hated being four inches shorter than him.

“Nice outfit,” Liam said taking in the remains of Joey’s hastily-constructed pirate costume; red and black striped nylon pants ending in a ragged cuff just below the knee, black patent-leather Doc Martin boots, and a wide gold sash tied around his waist. He’d lost his shirt somewhere in the club. The way Liam couldn’t tear his eyes away from Joey’s tattoos made the loss of the two hundred dollar shirt totally worth it.

Liam picked up the end of the sash, sliding the silky material through his fingers. “How come every time I see you, you’re wearing some kind of costume?” Last time they’d met, Joey had been dressed as Santa.

Liam, of course, was his normal GQ self in dark trousers, a white dress shirt, and one of his vast collection of purple ties. The perfect simplicity of his clothes making everyone else look like they were trying too hard.

“How come every time I see you, you’re overdressed?” Joey asked.

Liam ran his hand through his thick red hair. “At least I’m not wandering around half-naked, letting everybody and their brother get their eyes all over me.”

Liam scowled. “It’s a snake pit out there. I got groped half a dozen times walking here.”

Joey leaned back against the water-splattered sink counter. He crossed his arms over his chest. “Your point is?”

Liam stepped close enough that their thighs brushed. Dropping his hand heavily on Joey’s shoulder, he watched transfixed as his thumb traced the curve of Joey’s collarbone. “My point is, that maybe I don’t like the idea of you getting pawed at by a room full of drunks and puck bunnies.”

Joey knocked Liam’s hand away. He had to be fucking kidding. “Tough shit.” Joey pushed himself upright, poking Liam in the center of his (distractingly firm) chest, hard enough to make him take a step backward. “You got no right to tell me what to do or not to do.” 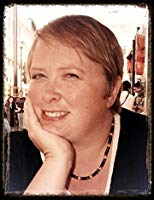 After time spent raising children, earning several college degrees, and traveling the world with the U.S. State Department, she is returning to her first love – writing.

A dreamer and an idealist, Amy writes about people finding connection in a world that can seem lonely and magic in a world that can seem all too mundane. She invites readers into her characters’ lives and worlds when they are their most vulnerable, their most human, living with the same hopes and fears we all have. An avid traveler who has lived in big cities and small towns in four different continents, Amy has found that time and distance are no barriers to love. She invites her readers to reach out and share how her characters have touched their lives or how the found families they have gathered around them have shaped their worlds.

Born on Long Island, NY, Amy has lived in Los Angeles, London, and Bangkok. She currently lives in a town suspiciously like Red Deer, Colorado.

Click the image, below, for a chance to win in my newsletter subscribers’ June giveaway (you must be an active subscriber to win).