To save his unborn babies, he must put his trust in strangers.

Jax has made mistakes in his life, the biggest of which was falling for Lyndon. His love died when Lyndon refused to claim him as his mate after Jax discovered he was pregnant. His feelings turned to hate when his babies were stolen from his care the day they were born.

Reliant on Lyndon for the cream he needs to survive, Jax does everything he can to keep him happy and he lives for the day when he will be reunited with his children.

When Jax discovers he is pregnant for a second time, he is terrified his second litter will be taken from him, too.

Ty is a dual-gendered feline who dreams of carrying his own babies one day. If they are fathered by Cal, the sexy feline he feeds from, it would be even better. Ty’s parents have other ideas. They don’t wish the public to know that their high-born son is dual-gendered, and arrange for a mating festival to take place so Ty can choose a dual-gendered mate of his own.

Although Ty has no intention of submitting to his parents’ wishes, something about Jax draws Ty to him and when he and Cal discover Jax’s secret, they know they must help.

Ty and Cal offer Jax a way to escape Lyndon’s clutches, but Jax knows almost nothing about the two felines who have offered to claim him.

The stakes have never been higher and Jax must learn to trust again, or risk losing everything.

Ty helped Jax into the boat, and once they were seated, Cal joined them and rowed them out to the middle of the lake.

“Privacy at last,” Cal said as he pulled in the oars. “Though you could have picked somewhere away from the water.”

Ty snorted. “And have Lyndon lingering around?”

Jax frowned. “Are you saying you deliberately ditched Lyndon?”

“We are,” Cal confirmed. “We wanted to talk to you privately.”

“What about? It’s my uncle you’d need to speak to if you wanted to claim me as your mate.”

Ty gave another snort, this one even louder than the first. “Don’t you get a say in the matter?”

Jax trailed his fingers in the water. “Not really.”

Jax sighed, but didn’t say anything. It hadn’t been his life for a long time, but how could these two felines possibly understand that?

Ty took hold of Jax’s hand and gave it a squeeze. “Jax, we know you’re in some kind of trouble, but we can’t help you if we don’t know what the problem is?”

Jax finally looked at Ty and saw nothing but compassion in his amber eyes. “You should choose another mate, not me,” he whispered.

Cal slowly inched over from his seat and sat at Jax’s feet. “Ty will choose whoever he wants. Take it from someone who knows. Now, why don’t you tell us what the issue is with Lyndon?”

“There is no issue.”

“I disagree,” Cal argued. “I saw him fucking you in the garden earlier. Does your uncle know you’re not a virgin?”

The world swayed around him and Jax thought he might throw up. Then a strong arm wrapped around his shoulders, and he leaned into Ty, the strong steady heartbeat of the feline next to him helping to keep him calm.

“Yes, my uncle knows,” he whispered. “But he doesn’t know Lyndon is the one who has fucked me.”

Jax shook his head and toyed with the hem of his kilt. He shivered, even though he had put on his warmer cloak before they’d begun their walk. His uncle did know about Lyndon. He just refused to believe it.

“Tell us what happened,” Ty encouraged. “We want to help you.”

“Why?” Jax asked. “You don’t know me. I’m just a stranger who’s been paraded in front of you because I happen to have both female and male genitals.”

Cal took his hand and gave it a quick squeeze. “Because what I saw in your face when Lyndon walked away this afternoon was not the face of a feline in love with his devoted servant.”

Jax gave a bitter laugh that he quickly tried to suppress. “I haven’t been in love with Lyndon for a long time, if I ever was.”

“Your uncle seems to think a lot of him,” Ty commented.

“That’s because he doesn’t know the real Lyndon,” Jax replied. “If he knew what he was really like… oh, who am I fooling? He’ll never believe a bad word about him.”

“Because Lyndon is my uncle’s primary food source, too,” Jax said.

“That’s no reason to believe him over his own nephew.”

Jax shrugged. “He won’t hear a thing said against him. Believe me, I learned that lesson the hard way.”

Jax could tell he wasn’t going to get off this boat until he told them what they wanted to know. Perhaps he could give them an edited version they would accept.

L.M. Brown is an English writer of gay romances and all male ménage romances.

Most of all, she believes in love. 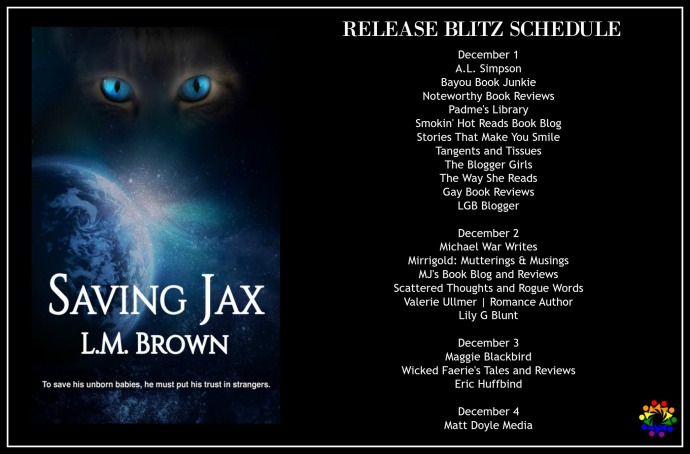