It is a standalone story, but is the first in the Great Plains Shifters series (the same universe as The Mountain Shifters).

Falling for his deceased twin brother’s mate was never part of Dustin’s plan.

This midwestern Alpha might be a little rough around the edges, but he lives by a few simple principles and honor is chief among them.

Nonetheless, when tragedy strikes the Meadowlands Pack, Dustin feels he has no choice but to bring his twin’s mate home to take care of him. The only problem is, Caleb isn’t anything like Dustin expected of the city omega who stole his brother’s heart and divided their family.

What starts out as trying to do the right thing soon becomes a blurry series of complicated decisions that lead Dustin further away from the path he’s always followed—and further into the arms of the one omega he was never supposed to want.

Caleb has been through the worst a mated omega could fear. He’s lost his mate and their unborn child, and now he finds himself at the mercy of an Alpha who has every reason to hate him.

Despite being twins, Dustin and Caleb’s former mate, Alec, are nothing alike. Caleb wants nothing more than to please his new Alpha and secure his position in the pack, but Dustin seems to take everything he says the wrong way.

As forbidden tensions mount between Alpha and omega, Caleb begins to fear that Dustin will start taking his developing interest the right way.

Eventually, Ariel and Caleb parted ways to go to bed, but Caleb found himself face-to-face with Dustin on his way to his own bedroom.

“Sorry,” he said, moving to walk past Dustin only to have the Alpha choose the same path.

“My fault,” Dustin said, ducking his head as he moved forward. They checked each other yet again.

Caleb couldn’t help but laugh. “Maybe it would help if we had a plan.”

“Probably,” Dustin grinned. The man’s smile did things to Caleb’s heart that were downright unfair. “I was heading downstairs to scrounge up something to eat, so maybe you should go first.”

“Oh. If you’re hungry, Ariel and I made dinner. I could heat some up.”

Dustin seemed to hesitate. “You were going to bed, I don’t want you to have to go back downstairs.”

“Yes, but I’ve seen the way you use that oven, and it’s a matter of fire safety,” Caleb teased, walking back down the stairs. Dustin followed him, but he could tell from the Alpha’s silence that something was on his mind.

Dustin was quiet as he sat at the counter while Caleb gathered the bread and leftover roast beef. “You’ve been working late a lot,” he said, deciding that it was as good a time as any to confirm his suspicion that Dustin was avoiding him. “That must get exhausting.”

“Just a lot of things to take care of, with Ariel and Futurus.”

“Right,” Caleb said softly. “You know, if you ever want the place to yourself, I’d be happy to go somewhere.”

Dustin looked up, his eyes wide with surprise. “What? No. Why would I want that?”

Caleb gulped. “I just thought… I don’t know, you’re used to practically living alone. I just thought maybe it was a bit much, having me around all the time.”

“I love having you around,” Dustin said earnestly. “I just don’t want to…” He trailed off and Caleb waited for him to finish that thought, but he didn’t.

“I think it’s wonderful what you did,” Caleb said, deciding it was high time to change the subject. “Taking Ariel in, I mean.”

“Oh, that’s nothing. Any decent Alpha would do that.”

“Maybe, but there aren’t so many of those left these days,” Caleb mused. When he looked up from making Dustin’s sandwich, he found the Alpha watching him. “What is it?”

“Nothing,” Dustin said quickly, taking the plate. “Thanks.”

“Anytime.” Caleb bit his lip. “I should probably head back upstairs.”

“You don’t have to. I wouldn’t mind the company.”

“Okay,” Caleb said, sitting back down across from him. He wanted the company more than he’d ever admit. Being with Dustin took less work than being alone. “So, how was your day?”

“It was good, other than the jerks who work at Futurus,” he muttered. “Yours?”

“Good. Not that eventful, but good. It’s getting easier the more time that passes, I guess.”

Caleb smiled. “No, but that’s what I feel like I’m supposed to say.”

“It’s nice sometimes, to be around someone I don’t have to say what I’m supposed to say to.”

“Yeah,” Dustin said, looking Caleb in the eye. It was so hard to hold that gaze, yet so difficult to look away. “I know the feeling.”

Caleb fought through the tears forming in his eyes. He didn’t want to cry in front of Dustin, but it was becoming so easy to drop his guard around the Alpha. “I know it sounds silly and trite, but being around you, as different as the two of you are, it makes me feel close. Not because you remind me of him so much, but just…knowing you loved him, too. It’s nice.”

Dustin reached across the counter, taking Caleb’s hand in his. The Alpha’s palm was rough and callused from hard farm work, but his touch was so gentle it made Caleb’s hand tingle. It felt so right, even though the things it made him think were so wrong. “I feel the same way, Caleb. This has been hell, all of it except for you.”

A tear slipped down Caleb’s cheek but he wiped it away quickly. “It’s so weird. I’ll feel like things are finally starting to get a little bit better, and then something happens and I’m back to square one. It’s always the little things. Like the other day, one of the other wolves in the pack just mentioned someone’s name in passing. Baylor,” he said with a pained laugh. “It’s just a name we’d talked about giving the baby. Alec liked it. I was on the fence. It wasn’t even like it was set in stone, but when it happened, it just…cemented. And then I heard that name again, and it just hit me that no one’s ever going to know our baby’s name. No teacher’s going to call it during roll on the first day of class, no other children on the playground are going to yell, ‘Baylor, you’re it!’ I don’t even know if Baylor was a boy or a girl. I didn’t want to know.”

Dustin’s hand left Caleb’s only so the Alpha could dry his tears. Caleb was surprised when Dustin stood and walked around the island to take him into his arms. The Alpha’s scent enveloped him, reassuring and familiar. That touch was enough to break him. He was so tired of pretending to be strong, but when he was with Dustin, he didn’t feel like he had to be.

The Alpha held him for what must have been a solid ten minutes before Caleb finally managed to collect himself. “I’m so sorry,” he murmured. “I don’t know why I broke down like that.”

“You don’t have anything to be sorry for,” Dustin said, his voice husky and full of sympathy. “This has been…well, it’s been good for me, too. I think we both needed it.”

“Yeah,” Caleb agreed, feeling a twinge of guilt as he realized that when he was with Dustin, the Alpha’s presence eased the pain more than the drugs at the hospital ever had. “I think so, too.”

After bidding Dustin goodnight and returning to his room, Caleb slipped into an empty bed and hated himself for dreaming that he wasn’t alone. For the first time since Alec’s death, it wasn’t his mate whose arms were wrapped around Caleb in his dreams.

L.C. Davis is an M/M romance author with a passion for representation. Series include The Mountain Shifters, Great Plains Shifters, Kingdom of Night and Queer Magick.

Want updates when there’s a new book available or occasional deals and promotions?

Go to  https://www.instafreebie.com/free/LyGjh to sign up for the L.C. Davis MM Romance Newsletter (Adults Only)

Enter the Rafflecopter Giveaway to win a $10 Amazon gift card 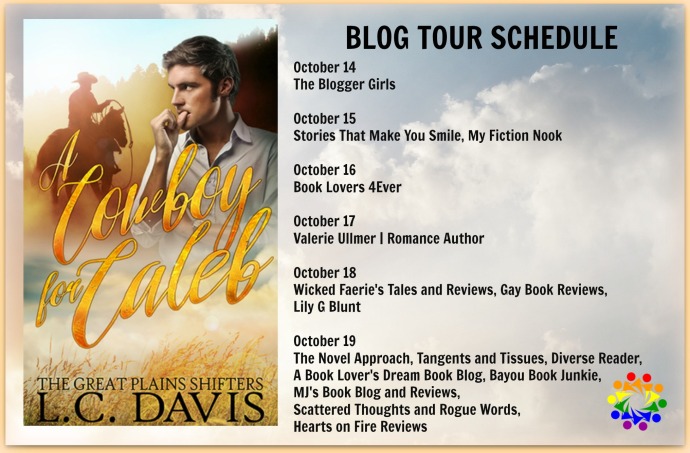 Stories That Make You Smile