Please join me in welcoming author L.C. Davis to my blog. L.C. has joined us today to answer a few questions about his writing process.

Nicholas wants nothing to do with omegas, and Avery has already signed a contract binding him to another Alpha. Fate has other plans for them both.

As the omega spokesman for the infamous Futurus Initiative, Avery Callahan is a controversial figure who’s used to being envied, occasionally despised and always the center of attention. His kidnapping at the hands of the twisted omega at the helm of the radical anti-Futurus group known as Epsilon shook his perfect world to the core, and Avery’s abnormally conventional parents no longer know what to do with him. In a last-ditch effort to save their son’s reputation—and his engagement to a prestigious politician—the Callahans send him to the small, idyllic pack of Southbend for some much-needed rest and recovery.

When Avery arrives in Southbend, he finds the Meyer household anything but welcoming and he immediately clashes with the rakishly reluctant head of the household. Nicholas might be a brilliant lawyer with good looks and charm in abundance, but he makes no secret of the fact that Avery is persona non-grata in his pack. How is Avery supposed to heal his own wounds when an Alpha who looks at every omega with disdain makes him question everything, including his participation in the breeding program he’s devoted his life to promoting?

Nicholas has it all on the surface—rising-star status as an attorney with his own practice, a sizable inheritance and the option of going home with any omega he chooses at the end of the night—but beneath the mask of his status, he hides a secret that makes him feel unworthy of the title of Alpha. Past abuse has left him with a deep-seated revulsion towards omegas, the very class of shifter he’s supposed to crave. He uses work and meaningless flings with other Alphas and betas to distract himself from the family life he doesn’t believe he deserves, but in the wake of his estranged father’s death, Nicholas is called home to take on a role he never wanted.

Forced to give up his high-profile career and take the reins of his family’s pack, Nicholas finds himself wholly unprepared to fill the shoes of the man he hated. Because fate isn’t cruel enough, the Spirits choose this moment to send him his destined mate—a charming yet infuriatingly stubborn omega he can never love or even claim. At least, that’s what he thinks until he realizes that the very traits that repel him from other omegas draw him to Avery in a way he finds as bewildering as it is intoxicating. 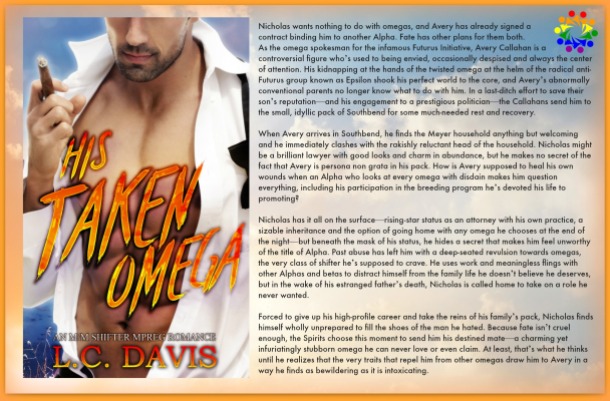 “Well,” Nicholas said, coming to a stop in the middle of the town square. “This is the great metropolis of Southbend. What do you think?”

“It is certainly that.” Nicholas grinned. “Should we head back? You must be tired after your trip.”

“I am,” Avery admitted, falling into step beside him. “Guess I am here to relax.”

“What else have you heard?”

Nicholas wasn’t sure how to respond. Avery gave him a knowing look.

“You can be honest. You won’t hurt my feelings.”

“It’s nothing bad, if that’s what you’re thinking.”

“I guess that depends on whether you consider the public face of the Futurus Initiative having a nervous breakdown in the middle of a fundraiser to be a bad thing.”

“Everyone knows what you went through. You’re a hero. If they’d judge you for that, they’re not worth the time.”

“Three months is barely enough time to enjoy summer break, let alone get over being kidnapped.”

“Maybe you can tell my parents that. They’re convinced I’m irreparably broken.”

“You don’t look broken to me.” Nicholas pretended to look the omega over for damage. “Maybe a small dent right here,” he said, poking the dimple on Avery’s cheek that deepened when he smiled.

“Either way, it looks like I’m stuck here until I can convince my parents of that.”

“That makes two of us. For what it’s worth, it’ll be nice to have the company.”

Another lie, but at least this one was for a worthy cause. It wasn’t Avery’s fault that an Alpha with an irrational aversion to omegas—or at least intimacy with one—had imprinted on him.

Avery was there to recover, not to find a mate when he already had one. The more Nicholas reminded himself of that, the better. His aversion had kept him single into his early thirties, so surely he could manage to control the hormones and irrational impulses for the few weeks Avery would be staying with them. Once he went back, both of their problems would be solved. Avery could go back to his life as the Futurus golden boy, and Nicholas could sleep a little easier knowing that he wasn’t going to imprint on the next omega who walked into his office looking for help.

In the meantime, he just had to fight the urge to commit the greatest sin of his profession: telling the truth. 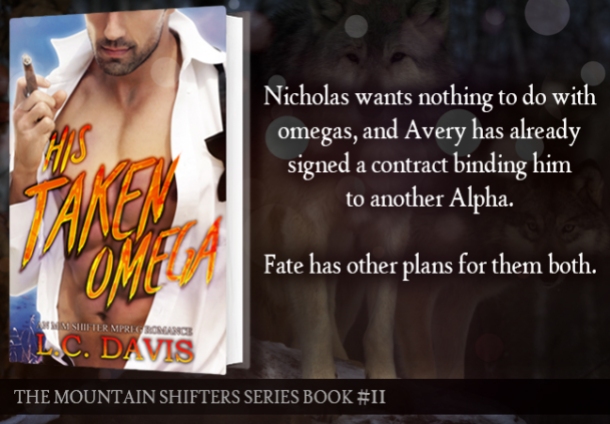 Congratulations on your new release. Please tell us a little bit about it. What’s your favorite aspect or part of the story? Do you have a favorite character? Who/Why?

Thanks! I’d have to say Nicholas is my favorite character in this one, simply because he grows so much throughout the story. He has to learn to fight for what he wants.

Are you a planner or a pantser? How much do you know about your story before you start writing? How often does your plan change? Why does this work best for you?

I’m definitely a pantser. That’s the fun part about writing within a universe that’s already been established through past stories, it provides enough framework to create natural tension and problems, so I can pretty much toss some characters in and see what happens!

Do you schedule a certain amount of time for writing each day/week, or do you just work it in when you can? Would you like to change this, or does your current method work well for you?

I block out time almost every day, from 9-6. Those are my “set hours,” but I’ll often end up writing something that takes me well into the evening! I’m a big believer in structure, with the flexibility to take a day off or make adjustments as needed.

What was the most difficult part of writing this book? Why?

Nicholas’ past and Avery’s PTSD were both difficult to get into, but I think they’re important topics that need to be addressed more, especially when it comes to the aspect of healing. The Mountain Shifters Series is all about finding love and acceptance through difficult situations, but even though I know there’ll be an HEA, I feel for my characters in the process of getting there!

How do you develop a story idea? Do you always use the same method? Specifically, which do you develop first in your story building, the characters or the plot?

Usually it starts with a theme that carries through the book, and I try to examine how that theme plays out in each character’s life until their individual stories become one. The theme for “His Taken Omega” is definitely “enough,” in the sense that both Nicholas and Avery are perfectionists in their own right, and they have to come to terms with being imperfectly perfect for each other. I wouldn’t say I develop characters so much as they pop into my head and I try to stay true to their motivations throughout the narrative.

What are your favorite genres when it comes to your own pleasure reading? Do you prefer to read ebooks or print?

I love reading romance as much as I love writing it! Paranormal, contemporary, romantic suspense, you name it. I’m also a major horror junkie. There are advantages to both mediums, and I’d say I read ebooks most often, but for some reason, when it comes to nonfiction, I like to have the physical book in hand.

L.C. Davis is an MM romance author with a passion for LGBT representation. His series include The Mountain Shifters, Queer Magick and Kingdom of Night.

Enter the Rafflecopter Giveaway for a chance to win a $10 Amazon gift card.

Stories That Make You Smile INTERVIEW

Land of the Book Fairies REVIEW

Click the image, below, for a chance to win in my newsletter subscribers’ December giveaway (you must be an active subscriber to win).